A Stem Cell for Every Occasion 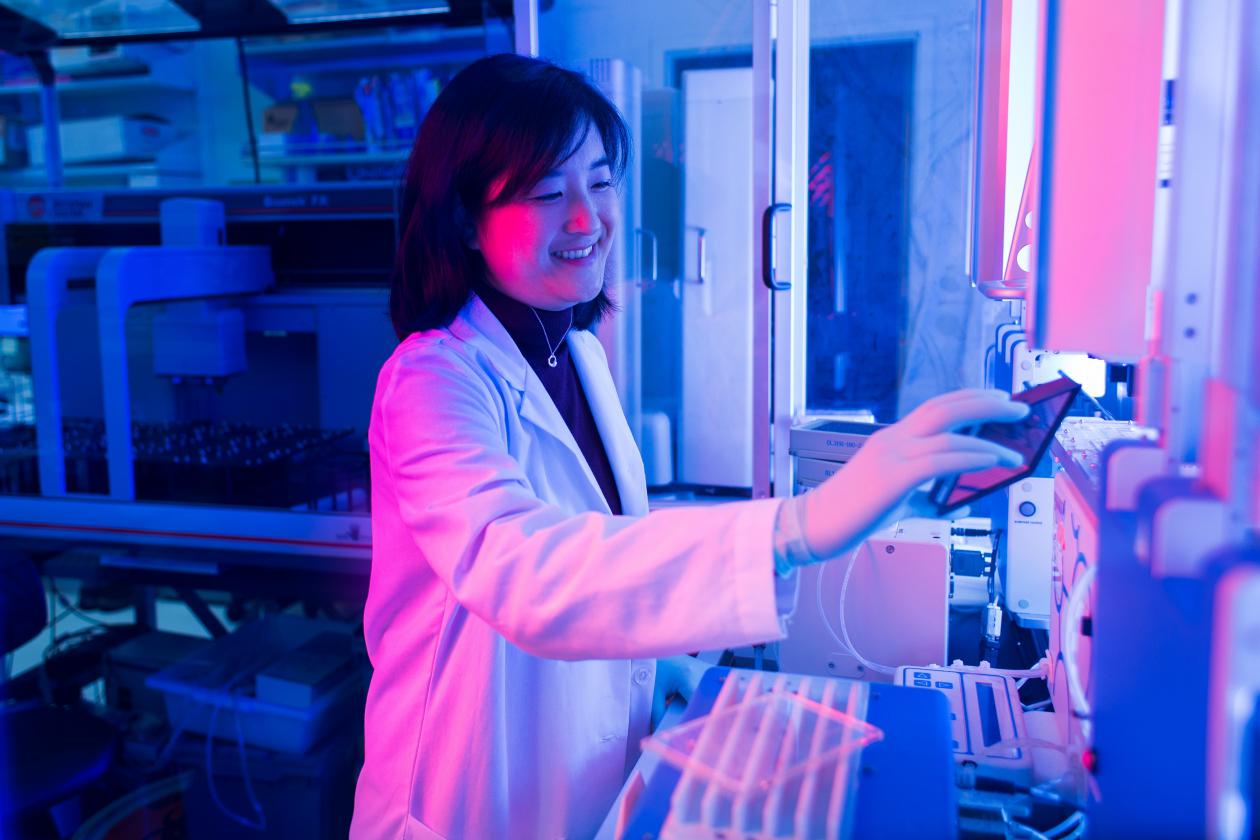 Supported by an RPB Unrestricted Grant to the University of Washington School of Medicine, Dr. Jennifer Chao is assessing the ability of thousands of small molecules to enhance the survival of retinal cells created from AMD patient-specific stem cells. This is an important step in discovering disease- and patient-specific therapeutic drugs.

The idea that stem cells – the precursors of all body tissues – could be turned into organ replacements for diseased body parts has tantalized physicians and patients for decades. Scientists have been able to increase the availability of stem cells by developing techniques to transform a patient's skin and blood cells into a primitive stem cell state from which all forms of human cells can, theoretically, be coaxed. These human induced pluripotent stem cells (hIPSC) have the added benefit of appearing to the patient's immune system as native tissue and avoiding attack by the body's immune response.

Ultimately, vision researchers hope to use a patient's own cells to reverse vision loss, but, before regenerated tissue transplantation can restore sight, obstacles and questions remain. Will the relatively immature cells derived from hIPSC function within a patient's already mature visual pathway? Will any remaining traces of the culture media used to grow the new cells affect the patients receiving them? How many implanted cells will be required to restore function? Can retinal-cell transplantation procedures be refined to be less invasive and avoid potential further vision loss from surgical damage? Is rod cell transplantation sufficient to protect or restore sight, or is cone cell transplantation also required (cone cells are dependent on rod cells for survival)? How will the brain respond to stimuli from the new cells?

As these questions are being answered and hurdles are being overcome in RPB-supported labs across the country and elsewhere, hIPSC are proving to be valuable in other ways -- especially as models for testing treatments that cannot yet be applied to patients and to better understand the mechanisms that lead to a disease. Here are some of the stem cell investigations that were reported underway at RPB grantee institutions in 2014.

Reported that stem cells can be transformed into corneal endothelial cells and applied topically to repair the corneal surface in patients with Fuchs corneal dystrophy as well as other corneal disorders, without surgery, which is the common treatment for these patients.

Used patient-derived, stem cell-derived retinal ganglion cells to create a "disease in a dish" model of glaucoma that will provide an abundant source of cells with which to test novel drugs, such as neuroprotective agents.

David Geffen School of Medicine at the University of California, Los Angeles, CA

Created retinal ganglion cells and photoreceptors from induced pluripotent stem cells in order to study the possibility of retinal repair in AMD and glaucoma.

Keck School of Medicine of the University of Southern California, Los Angeles, CA

Pursued an in vivo technique to reprogram retinal Müller cells (which maintain the stability of the environment surrounding retinal cells) into retinal progenitor cells that demonstrate light responsiveness.

Reprogrammed cells obtained via skin biopsies from patients with a specific form of open-angle glaucoma into becoming induced-pluripotent stem cells (iPSCs) in order to grow optic nerve cells in a dish to further understand the genetic causes of this condition. Treated induced pluripotent stem cells with gene replacement therapy to determine the optimal expression of replacement genes to improve retinal function in patients with Bardet-Biedl syndrome.

Reported the experimental recovery of central vision lost to retinitis pigmentosa by transplanting rod stem cells beneath the retina to rescue cone cells.

Directed human induced-pluripotent stem cells to recapitulate in a dish the developmental steps that lead to the formation of the retina in the human embryo, concluding with the formation of a 3D retinal tissue with the capacity to sense light. Read More

Cultured retinal cells derived from stem cells on different biomaterials and determined the optimal biomaterial structure that promotes a differentiated phenotype in order to reconstruct the retina.

The Regents of the University of Michigan School of Medicine, Ann Arbor, MI

Advanced strategies for stimulating retina regeneration by identifying the factors that cause the reprogramming of Müller glia cells into retinal stem cells in zebrafish. Initiated a study to identify how epigenetic factors (non-DNA inherited factors) may play a role in the first events underlying pluripotent cell differentiation into retinal cells so that, in the future, retinal cells can be more efficiently derived from stem cells for transplantation and drug testing.

Identified a novel method of reprogramming a variety of cells directly into induced retinal epithelial cells (RPE) that can one day be transplanted by a retina surgeon to replace damaged or injured RPE cells in patients with AMD or other retinal disorders.

Explored the use of retinal ganglion cells generated from pluripotent stem cells that were created from corneal limbus cells (from the border of the cornea and the sclera -- the white of the eye) as a stem cell therapy for retinal disease.

Pursued creation of a "clean" media (free of the impurities that can be found in widely used stem cell growth products) for the promotion of stem cell renewal.

Began a human clinical trial to test the efficacy of patient-derived corneal stem cells for resolving corneal scar tissue. Explored the use of stem cell lines to replace the failing, eye-pressure-controlling trabecular meshwork (outflow structure) for patients with glaucoma.

Increased the efficiency of rod cell production from hPSCs in order to create lab disease models and cell replacement strategies for retinitis pigmentosa.