How the Eye Works

Light rays enter the eye through a transparent layer of tissue, known as the cornea. The cornea bends light through a watery substance called the aqueous humor. As light continues on its pathway it passes through the dark, round opening in the center of the colored iris known as the pupil. The iris, the part of the eye that gives the eye its color, also changes the size of the pupil from very small to large in order to regulate the amount of light that is entering.

Light then passes through another structure, called the lens.  The lens is attached to muscles which contract or relax in order to make adjustments which allows light to be focused for clarity. Once through the pupil and lens, light then passes through the larger posterior portion of the eye that is filled with a clear, jelly-like substance called the vitreous humor. Continuing through, light comes to the retina, the membrane that lines the back wall of the eye, containing photo- receptor (rod and cone) cells. These cells convert light to electrical impulses.

The cone cells (about 7 million in number) are in greatest concentration in the small, central part of the retina, called the macula. This area is responsible for producing sharp, detail vision and color vision. The rod cells (numbering about 100 million), in the peripheral retina, provide vision in dim light. Electrical impulses are sent through the optic nerve, the bundle of retinal fibers that exits the back of the eye, and transported to the brain where they are interpreted in the primary visual cortex and an image is perceived.

The Parts of the Eye 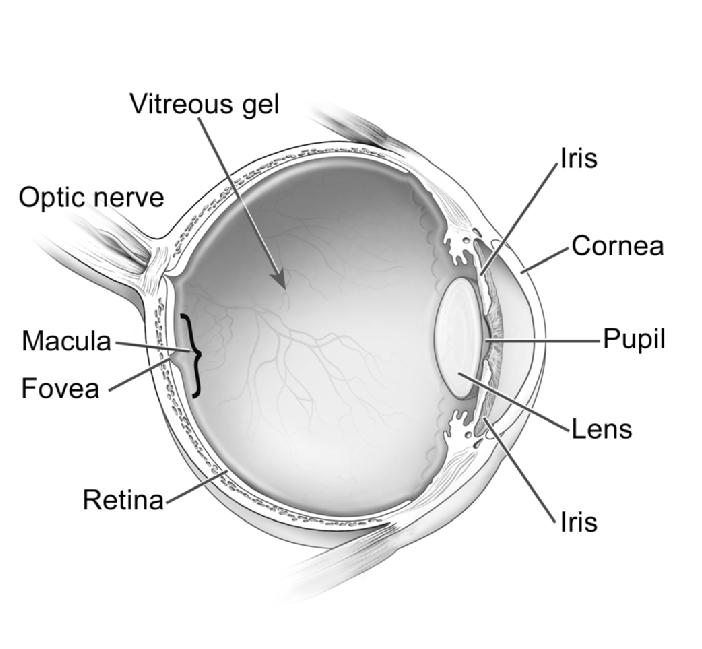 Search the National Eye Institute's online glossary on the eye