IN THE FUTURE, ALZHEIMER’S MAY BE PREDICTED DURING EYE EXAMS

RPB-funded researchers at Washington University School of Medicine in St. Louis (WUSTL) have found a correlation in 30 older patients between retina thinning and elevated levels of tau and amyloid proteins that are the hallmark of Alzheimer’s disease.  They made their discovery by using optical coherence tomography angiography (OCTA) to examine the patients’ retinas.

This first-of-its-kind research was published in August 23, 2018 in JAMA Ophthalmology.  The study was funded by an RPB Unrestricted Grant to the WUSTL Department of Ophthalmology. 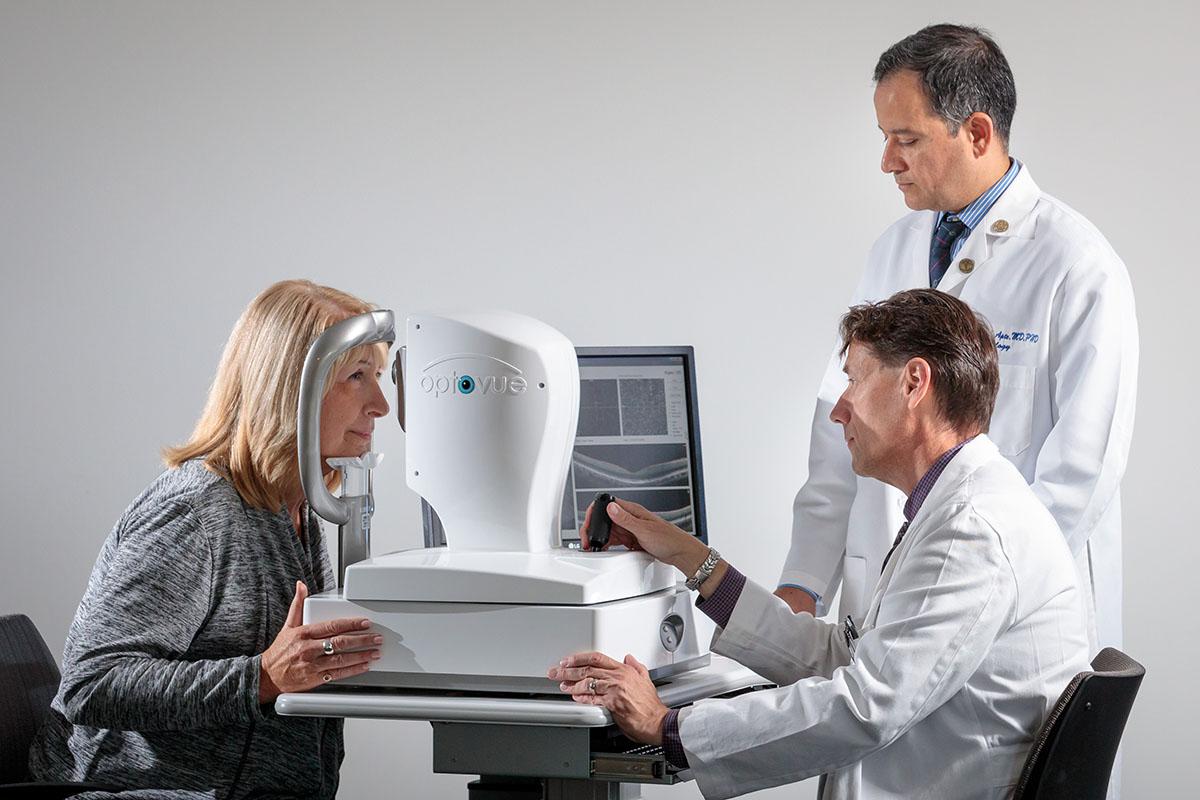 Participants in the study were patients in The Memory and Aging Project at Washington University’s Knight Alzheimer’s Disease Research Center. About half of those in the study had elevated levels of amyloid or tau as found by PET scans or in cerebrospinal fluid.  This suggests that although they didn’t have symptoms, they likely would develop Alzheimer’s. In the other study subjects, PET scans and cerebrospinal fluid analyses were normal.

“In the patients with elevated levels of amyloid or tau, we detected significant thinning in the center of the retina,” said co-principal investigator Rajendra S. Apte, MD, PhD, the Paul A. Cibis Distinguished Professor of Ophthalmology and Visual Sciences. “All of us have a small area devoid of blood vessels in the center of our retinas that is responsible for our most precise vision. We found that this zone lacking blood vessels was significantly enlarged in people with preclinical Alzheimer’s disease.”

The eye test used in the study, which is similar to technology found in many ophthalmologists’ offices, shines light into the eye, allowing the physician to measure retinal thickness, as well as thickness of the fibers in the optic nerve.  In this study, researchers added angiography, which allows physicians to distinguish red blood cells from other tissue in the retina.

Dr. Apte has been a recipient of the RPB Nelson Trust Award for Retinitis Pigmentosa (2016); the RPB Physician Scientist Award (2014); and the RPB Career Development Award (2004).

While this was a preliminary study, Dr. Apte and colleagues believe that OCTA may become an inexpensive and noninvasive way to determine who should undergo more extensive Alzheimer’s testing.