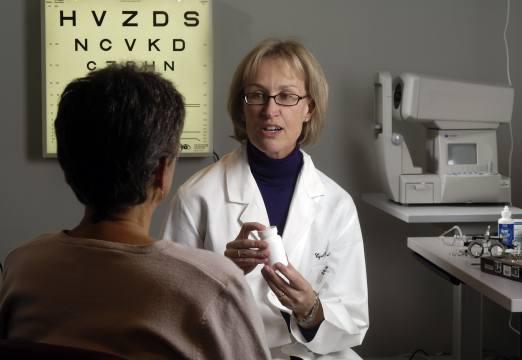 RPB Senior Scientific Investigator Cynthia Owsley, Ph.D., M.S.P.H., University of Alabama at Birmingham, has published a series of reports on the effects of deteriorating vision on the quality of life for elderly people.

Authors of a series of recent reports are hoping they raise a red flag that will eventually help to improve the quality of life for many elderly people living in nursing homes. Not only does this population have higher rates of visual impairment than those the same age living in communities, they have much lower rates of eye care.

In the study of 17 nursing homes, conducted by RPB-supported investigators, more than half the residents were visually impaired yet two-thirds had no record of or reference to an eye examination in their medical charts -- even though 90 percent of the residents had some form of health insurance.

According to the authors: "A variety of factors may contribute, including that persons with vision impairment may be more likely to be admitted to nursing homes, nursing home residents may have limited accessibility to doctors' offices because of lack of transportation and escort availability, residents may not wear spectacles even though they have them, family and health care professionals may believe that cognitively impaired persons do not personally benefit from treatments to improve vision and there is a shortage of eye care professionals who routinely serve clientele living in nursing homes."

The studies point to a lack of proper eyewear among nursing home residents and to another problem: three-fourths of those studied had faulty contrast sensitivity, making it harder to detect boundaries between objects and changes in brightness, both of which are important for mobility and reading.

The authors, led by RPB Senior Scientific Investigator Cynthia Owsley, Ph.D., M.S.P.H., University of Alabama at Birmingham, conclude: "These findings underscore the need for a systematic evaluation of the factors underlying the pervasive unavailability of eye care to nursing home residents in the United States so that steps can be taken to improve service delivery and eye care utilization."