New Hope In Fight Against AMD 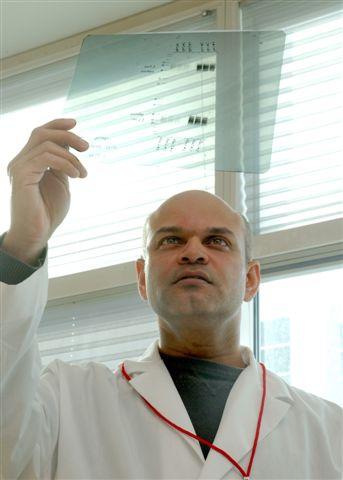 Dr. Kumar-Singh has received two grants from RPB: a Career Development Award and a Special Scholar Award.  He currently receives support through RPB's unrestricted grant to the department of ophthalmology at Tufts University School of Medicine.

A gene therapy approach using a protein called CD59, or protectin, shows promise in slowing the signs of age-related macular degeneration (AMD), according to a new in vivo study by RPB-supported researchers at Tufts University School of Medicine. Led by senior author Rajendra Kumar-Singh, PhD, the researchers demonstrated for the first time that CD59 delivered by a gene therapy approach significantly reduced the uncontrolled blood vessel growth and cell death typical of AMD, the most common cause of blindness in the elderly.

Activation of the complement system, a part of the immune system, is responsible for slowly killing cells in the back of the eye, leading to AMD. Activation of this system leads to the generation of pores or holes known as ‘membrane attack complex’ or MAC in cell membranes. CD59 is known to block the formation of MAC.

“CD59 is unstable and hence previous studies using CD59 have had limited success. The gene therapy approach that we developed continuously produces CD59 in the eye and overcomes these barriers, giving us renewed hope that it can be used to fight the progression of AMD and potentially other diseases,” said Kumar-Singh.

The current standard treatment for some forms of AMD requires an injection directly into the eye approximately every four weeks. According to Kumar-Singh, gene therapy approaches to treat AMD are especially attractive because they will allow patients to be treated less frequently, reducing patient discomfort and lowering chances of infection and other side effects associated with frequent injections into the eye.