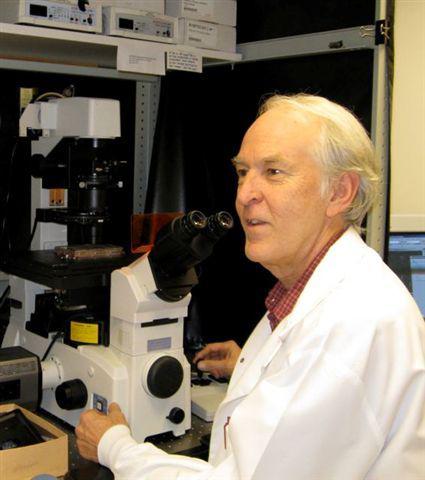 Stem cells collected from human corneas restore transparency and don't trigger a rejection response when injected into eyes that are scarred and hazy, according to experiments conducted by researchers at the University of Pittsburgh School of Medicine. Their study has been published in the journal Stem Cells.

"We have to demonstrate that it is safe for humans before we can conduct human trials," said Dr. Funderburgh, anticipating "stem-cell therapies for lots of parts of the body in the next 15 to 20 years."

The findings suggest that cell-based therapies might be an effective way to treat human corneal blindness and vision impairment due to the scarring that occurs after infection, trauma and other common eye problems, said senior investigator James L. Funderburgh, Ph.D., associate professor, Department of Ophthalmology. Dr. Funderburgh holds the Jules and Doris Stein Professorship from Research to Prevent Blindness.

The Pitt corneal stem cells were able to remodel scar-like tissue back to normal.

"Our experiments indicate that after stem cell treatment, mouse eyes that initially had corneal defects looked no different than mouse eyes that had never been damaged," Dr. Funderburgh said.

The ability to grow millions of the cells in the lab could make it possible to create an off-the-shelf product, which would be especially useful in countries that have limited medical and surgical resources but a great burden of eye disease due to infections and trauma.

"Corneal scars are permanent, so the best available solution is corneal transplant," Dr. Funderburgh said. "Transplants have a high success rate, but they don't last forever. The current popularity of LASIK corrective eye surgery is expected to substantially reduce the availability of donor tissue because the procedure alters the cornea in a way that makes it unsuitable for transplantation."

A few years ago, Dr. Funderburgh, with RPB grant support, and other University of Pittsburgh researchers identified stem cells in a layer of the cornea called the stroma, and they recently showed that even after many rounds of expansion in the lab, these cells continued to produce the biochemical components, or matrix, of the cornea. One such protein is called lumican, which plays a critical role in giving the cornea the correct structure to make it transparent.

Mice that lack the ability to produce lumican develop opaque areas of their corneas comparable to the scar tissue that human eyes form in response to trauma and inflammation, Dr. Funderburgh said. But three months after the lumican-deficient mouse eyes were injected with human adult corneal stem cells, transparency was restored.

The cornea and its stromal stem cells themselves appear to be "immune privileged," meaning they don't trigger a significant immune response even when transplanted across species, as in the Pitt experiments.

"Several kinds of experiments indicated that the human cells were alive and making lumican, and that the tissue had rebuilt properly," Dr. Funderburgh noted.

Under the auspices of UPMC Eye Center's recently established Center for Vision Restoration, they plan, after further testing, to develop the necessary protocols to enable clinical testing of the cells.

The research was supported by grants from the National Institutes of Health, the Eye and Ear Foundation (Pittsburgh), and an unrestricted grant from Research to Prevent Blindness, N.Y.