New Gene Therapy for Vision Loss from a Mitochondrial Disease

Adapted from a story by the National Eye Institute. 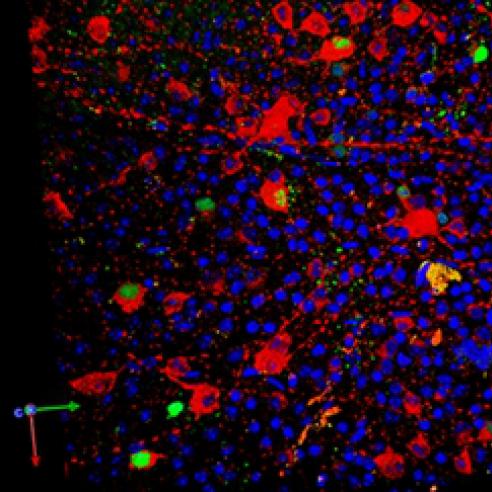 Researchers funded by Research to Prevent Blindness and the National Institutes of Health have developed a novel mouse model for the vision disorder Leber hereditary optic neuropathy (LHON), and found that they can use gene therapy to improve visual function in the mice. LHON is one of many diseases tied to gene mutations that damage the tiny energy factories that power our cells, called mitochondria.

"This study marks an important contribution to research on LHON, and in efforts toward an effective therapy. But the implications are even broader, because the approaches that the investigators used could aid therapy development for a vast array of other mitochondrial diseases," said Maryann Redford, D.D.S, M.P.H., a program director in Collaborative Clinical Research at NIH's National Eye Institute, which helped fund the study.

Mitochondria are as complex as any modern manufacturing facility, with specialized machinery for converting nutrients and oxygen into cellular energy. They even have their own DNA, and it is mutations within this mitochondrial DNA (mtDNA) that lead to LHON, as well as a host of other diseases. But the unique nature of mtDNA has presented challenges for developing and testing potential therapies for such diseases.

Until now, "there was no efficient way to get DNA into mitochondria," said RPB Physician-Scientist awardee John Guy, M.D., professor of ophthalmology and director of the ocular gene therapy laboratory at the Bascom Palmer Eye Institute, University of Miami Miller School of Medicine. Dr. Guy's laboratory is among the first to develop an approach that can target mtDNA in living mice and people.

Their success in creating a mouse model of LHON and using it to test an investigational gene therapy is described today in the Proceedings of the National Academy of Sciences.

An ongoing NEI-supported clinical trial, led by Dr. Guy, is testing the safety of the same gene therapy approach (without the red fluorescent protein) in people with LHON.

For more information, visit http://www.clinicaltrials.gov and search for the trial identifier NCT02161380.

you can join a clinical trial

The global impact of LHON is unknown. In England, the estimated prevalence is about 1 in 30,000. Early symptoms include blurry vison and usually appear during the teens or early twenties. Eyesight tends to worsen over time, eventually leading to a severe loss of sharpness (acuity) and color vision. These problems are caused by a loss of retinal ganglion cells—the cells that carry visual signals from the retina through the optic nerve and into the brain.

The most common mutation behind LHON impairs a mitochondrial gene called ND4. Dr. Guy began to research a possible gene therapy approach for delivering a substitute copy of the gene into mitochondria about 15 years ago.He received a RPB Research Sabbatical Award in 2001 to learn ND4 insertion techniques and a RPB Physician-Scientist Award in 2003 to lay the foundation for this work.

In most studies and applications of gene therapy, viruses have become the preferred vessel for delivering genes into cells. But viruses evolved to invade the body's cells and penetrate the nucleus, which contains the bulk of our DNA, comprising about 20,000 genes. Most viruses are poor at penetrating mitochondria.

To fix that, Dr. Guy and his team took advantage of the fact that mitochondria import cellular proteins that they cannot make themselves. By attaching a bit of one such protein to the outer shell of a virus—called an adeno-associated virus—he effectively gave the virus a homing signal and entry code into mitochondria.

This modified virus has been the key to creating a mouse that replicates LHON and to an investigational gene therapy for LHON that is currently in clinical trials.

To create a mouse model for LHON, the researchers loaded the virus with a defective copy of the ND4 gene carrying the same mutation that causes about 70 percent of LHON cases. They also included DNA coding for a red fluorescent protein, as a visible marker for the virus and its payload. Then they injected the virus into fertilized mouse egg cells, and grew the cells to maturity.

After breeding the mice through several generations, the researchers had their mouse model. The presence of the virally encoded ND4 mutation in the eye was confirmed by essentially doing an eye exam to look for the red fluorescent marker. Over time, the mice showed a loss of retinal ganglion cells, atrophy (shrinkage) of the optic nerve, and a decline in visual responses, as seen in a type of electrical recording from the retina known as an electroretinogram.

To develop a gene therapy for LHON, the team packaged the normal human ND4 gene into the same stealthy virus. This combination, when injected into the eye, led to improved visual function in the LHON mouse model. When injected into normal mice, the virus carrying ND4 did not cause any adverse effects on vision.

Prior to development of the new mouse model, Dr. Guy's lab had shown that they could produce temporary signs of LHON in mice. They were able to prevent development of LHON in the mice, but not reverse it. "Now we've shown that we can improve visual function after it's been lost," he said.

The mouse studies described in this release were supported by NEI grants EY017141, EY012355, and EY014801, and by Research to Prevent Blindness. The LHON gene therapy trial is supported by a cooperative agreement from NEI (EY023558).

The NEI, whose creation was initiated by RPB, leads the federal government's research on the visual system and eye diseases. NEI supports basic and clinical science programs that result in the development of sight-saving treatments. For more information, visit http://www.nei.nih.gov.

Flexible grants awarded by RPB are often used to provide proof-of-concept for NEI grants, creating an ongoing funding partnership between the two organizations.