RPB-supported researchers have shown that electric fields can be used to guide neural stem cells transplanted into the brain toward a specific location. The research, published July 11 in the journal Stem Cell Reports, opens possibilities for effectively guiding stem cells to repair brain damage. 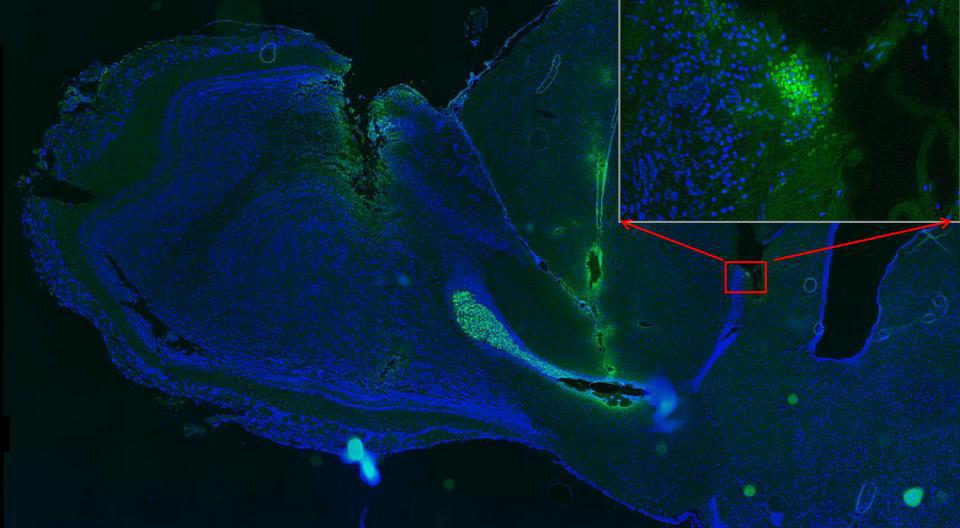 Transplants of neural stem cells might be used to treat brain injuries, but how to get them to the right location? UC Davis researcher Min Zhao and Junfeng Feng, a neurosurgeon at Ren Ji Hospital, Shanghai, showed that they can steer transplanted stem cells (green, in inset on right) to one part of a rat's brain using electrical fields. (Image: Junfeng Feng)

Two researcher teams—led by Professor Min Zhao at the University of California, Davis, School of Medicine's Institute for Regenerative Cures and Junfeng Feng, a neurosurgeon at Ren Ji Hospital, Shanghai Jiao Tong University and Shanghai Institute of Head Trauma—worked together to developed a model of stem cell transplants in rats. They placed human neural stem cells in the rostral migration stream — a pathway in the rat brain that carries cells toward the olfactory bulb, which governs the animal's sense of smell. Cells move along this pathway partly carried by the flow of cerebrospinal fluid and partly guided by chemical signals.

By applying an electric field within the rat's brain, they found that they could get the transplanted stem cells to swim "upstream" against the fluid flow and natural cues and head for other locations within the brain.

The transplanted stem cells were still in their new locations weeks or months after treatment.