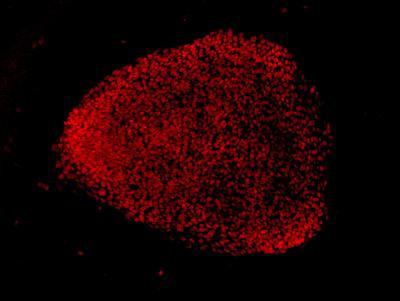 Using a new technology for repairing disease genes--the much-talked-about CRISPR/Cas9 gene editing, RPB-supported researchers at University of Iowa, working together with Columbia University Medical Center ophthalmologists, have corrected a blindness-causing gene mutation in stem cells derived from a patient. The result offers hope that eye diseases might one day be treated by personalized, precision medicine in which patients' own cells are used to grow replacement tissue.

With the aim of repairing the deteriorating retina in patients with an inherited blinding disease, X-linked Retinitis Pigmentosa (XLRP), Alexander Bassuk, MD, PhD, and Vinit Mahajan, MD, PhD, led a team of researchers who generated stem cells from patient skin cells and then repaired the damaged gene. The editing technique is so precise it corrected a single DNA change that had damaged the RPGR gene. More importantly, the corrected tissue had been derived from the patient's own stem cells, and so could potentially be transplanted without the need for harmful drugs to prevent tissue rejection. The research was published Jan. 27 in the journal Scientific Reports.

"With CRISPR gene editing of human stem cells, we can theoretically transplant healthy new cells that come from the patient after having fixed their specific gene mutation, " says Mahajan, clinical assistant professor of ophthalmology and visual sciences in the UI Carver College of Medicine. "And retinal diseases are a perfect model for stem cell therapy, because we have the advanced surgical techniques to implant cells exactly where they are needed."

The study was a "proof-of-concept" experiment showing it is possible not only to repair a rare gene mutation, but that it can be done in patient stem cells. Use of stem cells is key because they can be re-programmed into retinal cells.

The CRISPR technology was able to correct the RPGR mutation in 13 percent of the stem cells, which is a practically workable correction rate.

Bassuk notes this result is particularly encouraging because the gene mutation sits in a highly repetitive sequence of the RPGR gene where it can be tricky to discriminate one region from another. In fact, initially determining the DNA sequence in this part of the gene was challenging. It was not clear that CRISPR/Cas9 would be able to home in on and correct the "point mutation."

"We didn't know before we started if we were going to be able to fix the mutation," says Bassuk, associate professor in the Stead Family Department of Pediatrics at University of Iowa Children's Hospital.

Developed just three years ago, CRISPR/Cas9 has been heralded as a major breakthrough in genetic engineering, allowing scientists to easily, precisely, and relatively cheaply make specific alterations to the DNA in cells and experimental animals.

The technology has not yet been used in humans, so safety concerns remain about the potential for unanticipated genetic changes. Also, ethical concerns arise given this technique's capability to make permanent genetic changes in sperm and egg cells. Nevertheless, the possibility of being able to fix diseased genes has tremendous potential.

"There is still work to do," says Stephen Tsang MD, PhD, a collaborator and associate professor of ophthalmology at Columbia University Medical Center. "Before we go into patients, we want to make sure we are only changing that particular single mutation and we are not making other alterations to the genome."

Bassuk adds, "I think there is hope in real time for patients with this particular retinal degenerative disease."

The study was funded in part by grants from the National Institutes of Health, the Doris Duke Charitable Foundation, and Research to Prevent Blindness.